Note: jLab is for blog posts about creative, fun, or interesting Jewish or congregation-related topics. To submit a post, you must be a member of our congregation, and the topic must be Jew-ish, related to our congregation or the wider Jewish community. If you have something to share, please submit it here.

I went to see Gusti today.  The hospice people told Gusti’s daughter “final days.” Gusti looked comfortable when I saw her, quiet and small and breathing well. No IV, no tubes, no oxygen. Just her face, soft and old, and her skin, thin and crinkly. She looked like she could open her eyes at any moment and smile, but she could not hear us and seemed to be starting a trip, an inward trip across an ocean. Curling to herself. It reminded me of being with my father as he was dying. It truly seemed as if at any moment he would open his eyes and talk to me. Our connection seemed so close, so easy, so almost, yet it could not happen.

I am sure that to most people, it seems like of course, Gusti’s time is here and she could not have lived too much longer. After all, she is 106 years old and who expects, much less is granted, that kind of time? But for me, it’s her very longevity that makes it so difficult for me to say goodbye, to really believe that she is dying. Her age means that we have had a long time together, that I have known her longer than I have known my children and just five fewer years than knowing my husband. It means that she saw my four pregnancies and five births, that I remember when her son died and her grand and great-grand children were born. It means that she has been at our annual holiday party since its inception and that she welcomed my mother to Iowa when Alda moved here nine years ago.

It means that, due to a misjudgment on my part many years ago, I call her every day.  I started the morning calls when Gusti was not well; I and others thought that she was surely dying (nope). I wanted to make sure that I had my time with her and talked to her close to the end. So I started calling.  She recovered fully (not for the first or the last time) yet there was no good reason to discontinue the phone calls. So I didn’t.  I am still calling. Only now she can’t hear me, can’t ask me how my daughter is faring in college, how my husband’s back is, and who took the kids to school.

I was waiting all day for the time when I was to take my teenage son, at his request, to see Gusti. He had known her all his life, our elder Gusti, who now, at age 106, was dying, at least according to hospice’s predictions. I love feeling alive and real and potent and “in the moment,” and I feel that most at birth and death. I remember vividly my children’s births, all five of them, as I do my father’s death, when I put my head on his chest and heard that last, slow, heartbeat. Someday, maybe soon, maybe not, it will be my 90-year-old mother whom we midwife into death. For now, it is Gusti.

The other thing I craved was seeing how my son reacted to such an intense life situation. The fact that he wanted to see Gusti said a lot, as his younger siblings, understandably, refused the offer. I was proud of him. A boy of few words, I was not sure what it meant to him to be there, to see the early stages of dying, to say goodbye.  I wanted to watch him, to analyze him, but also, I wanted to protect him.

Immune to the power of what were surely strong drugs, Gusti was thrashing in her bed when we got there. Oddly, hospice can provide only so much pain relief to the dying because too much would, God forbid, kill the person. I thought that palliative and hospice care was to alleviate suffering and, if the person happened to die during the administration of drugs, so be it. Not so, apparently, to the dismay of Gusti’s daughters.

We did not stay long, perhaps half an hour. Gusti’s daughters were in chatty moods, one exhausted on one hour of sleep with adrenaline rushing through her overtired 70+ year-old body. The sisters asked Jeremiah about his interests and future while Gusti thrashed and one of us stroked her.

When it was time to leave, I asked Jeremiah if he wanted to say goodbye to Gusti. I had imagined that this is the reason that he came, and I wanted to give him this opportunity. I could not see or hear much, but he did go over to her and touch her before we left the now-busy room with an entering nurse and the promise of a sponge bath.

The special weather statement says that there is a high wind warning today. Gusts. Gusts for the day that we bury Gusti, my friend of 19 years. There were gusts too, on the day that I said goodbye to my father. I remember the angry wind blowing us toward the hospital entry as we tried to shelter ourselves from its cold November fierceness, slamming us, awakening us to the reality of his and our own impermanence. Today, I am honored to be with Gusti’s family, although I am not family. I want to take my place respectfully and not intrude, somehow not make my mourning an impediment to theirs. They are saying goodbye to their mother, something, I am now learning, I am not ready to do.  I remember Gusti at lunch, when we met once a month with the children for years.  We ate and talked, soup and salad and the mundane topics of daily life mostly, while the children played on the floor, getting small packaged retirement residence crackers most call Oyster crackers but my children called “Gusti crackers” much to her amusement. She was patient with them and listened, but it was clear that, even with her amazing energy, 90 was an old age to be coddling children.

Today, I pray to be a helpful presence to her daughters, to do whatever aids them and nothing that does not. I hope that I can fulfil the mitzvah in the most middot-honoring way. God please give me the right and appropriate measures for what I am about to do. Help me learn the ways of funerals and mourning and not be too awkward a practitioner as I try to honor them and my friend.

I miss her. I want to hear her voice saying “Is it a good one?” when I say good morning or “Are you still there?” after a silence over the phone. How are you, I would ask “Good good good. Never should be worse” she would say in her thick Viennese accent. Saying “assistant” living rather than “assisted,” staying there and avoiding the nursing home to the very end. Always in her own apartment, her crowded, plant and photo-filled apartment. Her African violets that bloomed for her son Peter, the photo of her husband Eric climbing with her on the Alps. Gusti, how you adapted to life in the United States so graciously, embracing it fully and completely. Your memory is a blessing.

Yesterday we laid Gusti to rest, all together at the small-town cemetery in the even smaller Kollman Jewish section. We left Gusti there in her pink shoes and sparkly top, with her parents, parents-in-law, husband, and son. The machinery made a loud noise as it lowered her into the ground, drowning out the sound of the rabbi’s prayers. We took turns shoveling dirt on her coffin. Her daughters, granddaughter, and great grandchildren did it too. The Jewish tradition of hearing the thud, making it final. Jarring, but with closure. I wished that I could tell Gusti how welcoming her family had been to me, how warm they were. But I could only tell them. I could see how much love there was in that family, for Gusti and for each other.  The service was short and small as Jewish funerals tend to be. She was up in front of us in her plain pine box while a few prayers were spoken and a few loving remembrances shared.  I felt proud being part of a procession to the gravesite, something I had not done much of, and never before like this, with a procession of, at most, six cars.

I want to go back and be with her, just one more time, to touch her and remember how it was to talk together. That’s the thing about finality though. The revisit is not an option.

I miss my Mom, who is both here and not here because of her dementia, but also, after Gusti’s death, I am so grateful that my mother is still here and well. At 90, she takes on a new sheen of health after having seen Gusti dying and Gusti dead, washing and cleansing her still almost-warm body the day after she died in the ritual Jewish act of taharah, purifying the body before burial. Even if I can’t go back to Gusti, she has taught me yet another lesson. To cherish my mother’s life and presence for as long as I can. 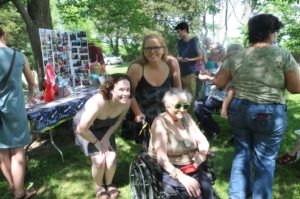 Parody of the Talmud by Miriam Yang

The gemara asks: one who is a Jew and who is Chinese, is he required to cook his own food on Christmas?

The Staff of Moses

A bit of pure escapism was called for, so I’ll speak about the staff of Moses.