Four Men, A Jewess, and a Somewhat Empty Nest

Note: jLab is for blog posts about creative, fun, or interesting Jewish or congregation-related topics. To submit a post, you must be a member of our congregation, and the topic must be Jew-ish, related to our congregation or the wider Jewish community. If you have something to share, please submit it here.

I approached this year’s Passover warily. What would it be like with our first bird having flown the nest? Our only daughter and a thespian to boot, Serena would always flavor our Seders with cast members of whatever show in which she happened to have a role in at the time of the spring ritual. Among others, we’ve had the high school cast of Grease and two casts from Diary of Anne Frank over the years (yes, she was in it twice).

One of the signatures of our Seders has always been the requirement that non-Jews attend. Our family enjoys the performative, teaching aspects of the holiday, and having newbies present allows the kids to demonstrate their pride in and knowledge of the evening’s events, from the telling of an obscure (to an Iowan kid anyway) Midrash to the chanting of the Four Questions.

But this year, no guests. No cast. No eldest daughter.

I considered cancelling the evening’s celebration. After all, the kids had activities that night. They’d never miss Passover, right? I could cook up a brisket, put some matzah on the table, and call it good. I would even make my mother’s famous “brown eggs,” the hard-boiled beauties dyed in onion skins stolen – uh, collected – from the grocery store over the past few weeks. Except that when I suggested my Seder-skipping idea, the plaintive cry “But Passover is so much fun!” came from the youngest of the brood. That sealed it. I could not let him down.

I contemplated the prospect of a six-person family Seder. Me, a Catholic husband, two often-surly teenagers, a mother with dementia, and a fun-seeking yet distracted 5th grader. Sounded like a blast.

Next step: get advice from my friend Lorraine, my sage like friend who has guided me through many a marital problem, child’s disaster, and mid-life crisis. Off I went to get some “Lo-vice” (which kind of sounds like a Yiddish term, but, as far as I know, is not. NB: Lo is not Jewish, but may as well be, as far as I am concerned) .

Wise Lorraine reminded me that the holiday is about transitions and change, and that our family was experiencing significant ones. I had to allow this holiday to have new meaning, new significance, and a new flavor post-Serena.  How could a Seder in the House of Four Men and a Jewess look? What new creations could develop and delight?

A few days before the Chag, I listened to Rabbi Amichai Lau-Lavie speak about the importance of the story and its telling on Passover.

He said that we are required to make the story relevant to the time and to the people at the Seder.

My youngest son Toe and I share an appreciation for the humorous drawings of the often-quirky Roz Chast. When I showed him a copy of her “All Candy Seder” cartoon which I put on the fridge every year around Passover, he immediately asked if we could do one, in addition, of course, to the traditional Seder Plate.  Seemed like a fun and harmless way to get him involved, and, since things were all topsy-turvy anyway, why not? 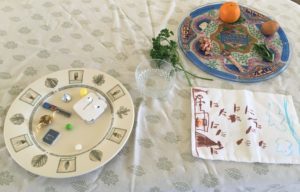 The idea that followed arose unbidden as I was buying the lemon drops and coffee candy for Roz’ Seder plate: what if we had a third Seder plate, adorned with random objects for which the kids would have to provide Passover-related explanations? What if, in addition to the traditional and the quirky, we had a Seder plate with, say, a cherry tomato, a slice of pineapple, and a cashew, and discussed the “significance” of each item? This seemed like a good way to get the kids involved and test/expand their knowledge of the import of the holiday. This idea might actually make the telling relevant.

I ran the idea by Toe; he loved it. I suggested that he find a few things around the house to add to the “connect me to Passover” Seder plate. I was expecting bits of food, but Toe had other ideas. Rooting around in his father’s junk drawer, he came to the kitchen with lead for mechanical pencils, ear buds, and a long-lost flash drive with a recording of the kids’ parasailing adventure one summer (in case anyone always wanted to know what a retired electrical engineering professor has in his junk drawer, you’re welcome). 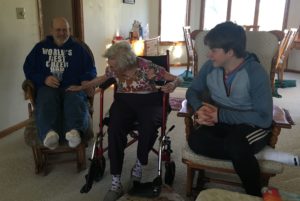 Toe had already come up with his own explanations for each of the items. That night, it would be the others’ turn. We gathered at our Seder in the living room, a comparatively small bunch compared to the cast of dozens usually provided by Serena.  My mother sat placidly in her wheelchair, taking in the antics of her grandsons. Steve, a bit apart as he tends to be, looked on. With trepidation I began the family service.

I am not sure if the teenagers were just tired from their sports practices or if they sincerely wanted to recognize the holiday, but there was a quiet, contemplative, almost reverent tone as we lit the candles, chanted the prayers, and sang Hine Ma Tov in  a round, things that I never thought my kids would do absent enthusiastic goyim.

My joy grew as Toe chanted the four questions, the older boys translated them and recited the plagues, and we each took an extra drop from our kiddush cup to name the eleventh plague of our times (Steve’s was “teenagers”).

Some Jews have a Shabbes Goy. We have an Afikomen-hiding one. After we proclaimed that here was the bread of our affliction, off Steve went to find one of his many-hint-needing hiding places.  By the time Toe explained the odd Seder plate, the atmosphere was relaxed and light and everyone offered their interpretations of the items.

Jeremiah volunteered to tell his (very long and drawn-out) version of Exodus, and by the time that was over, we were ready to eat.

Over brisket, Hillel sandwiches, and a way-too-salty kugel that I hope to never again replicate, the atmosphere was cozy and chatty. Afikomen prize distributed and lemon squares consumed, we ended our Passover Seder not with a long cast list of guests, but with an intimate new family tradition all our own.

The Holiness of Moral Imagination Singling Out Women

Parody of the Talmud by Miriam Yang

The gemara asks: one who is a Jew and who is Chinese, is he required to cook his own food on Christmas?

The Staff of Moses

A bit of pure escapism was called for, so I’ll speak about the staff of Moses.